Residential gas generators have been around for decades, but it was only in 2008 that Honda pioneered the first ever portable gas generator. Their Honda Portable Power System was the first of its kind, and it allowed homeowners, travelers, campers, workers, and hobbyists to enjoy a reliable alternate energy source anywhere, on-the-go.

Needless to say, Honda has cemented its place as one of the best portable power generator manufacturers, boasting a line of premier models that deliver dependable, sustained energy with excellent, long-wearing build quality. How do we know? We conducted research to provide a Honda EU2200i review and to learn more about the brand’s top-shelf portable gas generator, and it didn’t disappoint.

Relatively tiny at just 46.5 pounds, the Honda EU2200i is compact yet robust, delivering reliable energy that’s both clean and quiet. But is it really the workhorse you need? We weigh in with our definitive review. 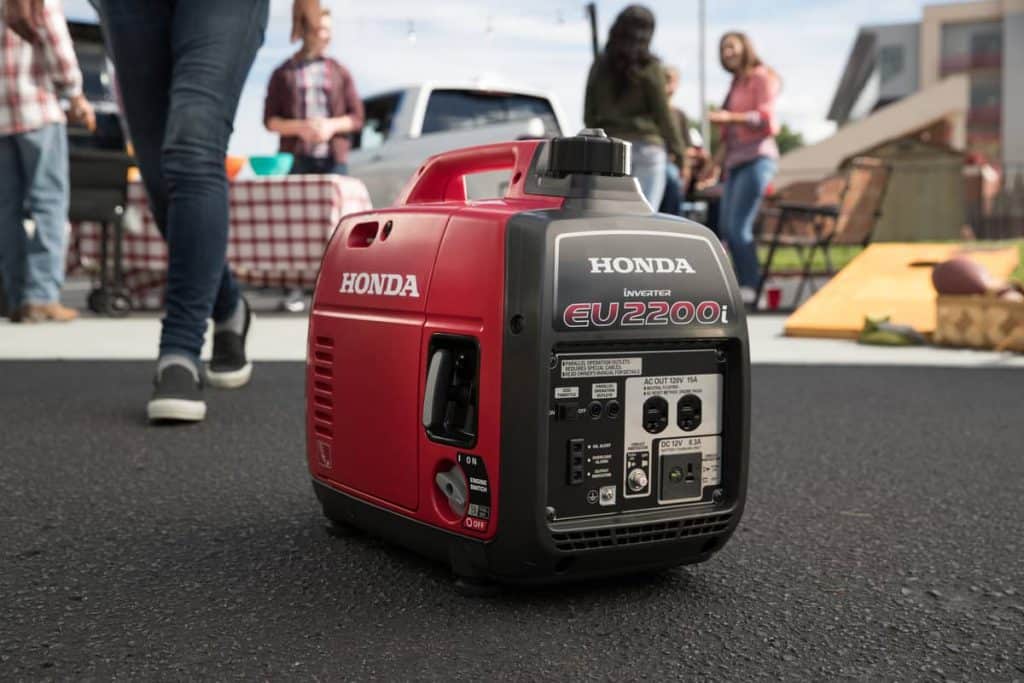 What’s in the box?

The Honda EU2200i is one of Honda’s top-tier portable gas generators, boasting a wealth of features that make it convenient, reliable, and practical for a variety of applications. Not quite sure what sets it apart? Here are some of the EU2200i’s features that are worth looking into.

Incorporating inverter technology into the EU2200i’s engine, Honda manages to provide users with clean, reliable, and stable power that’s perfect for sensitive devices. The EU2200i makes the ideal companion if you’re planning to power up gadgets like laptops, smart phones, and TV sets, thanks to its consistent and stable electrical current that’s less prone to surges.

Honda is one of the most prominent Japanese automobile manufacturers to date. Their range of motor vehicles include cars, vans, trucks, and motorcycles, which have all seen success and strong patronage worldwide. But aside from their core automobile line-up, the brand also produces a range of power products – an industry where they’ve earned top-tier status as well.

Presently, Honda’s selection of power generators and alternate energy sources compete closely with other prominent brands, including those that come from North American companies like Champion and Generac. According to the company’s statistics, they’ve sold some 6.3 million power products across the globe, and that number continues to grow with the release of better and more efficient models like the EU2200i.

The Competition – A Comparison Table

The Generac IQ2000 and WEN 56200i are some of the Honda EU2200i’s closest competitors, offering a combination of features that are almost exactly like Honda’s crowning portable generator. While all three of these generator models run on gasoline, the EU2200i excels in terms of fuel economy, boasting the longest run-time and wattage despite having the smallest fuel capacity.

With a wealth of safety features contained in a compact, lightweight body, the EU2200i doesn’t only excel in terms of hazard control, but also leaves its competitors in the dust when it comes to build-quality. Its extra-durable body doesn’t vibrate during operation, shedding light on the world-class process that goes into manufacturing it.

Sure, the EU2200i might not be best-in-class in terms of silent operation, and neither does it have as many outlets as WEN’s entry. But it definitely doesn’t lag far behind. Without comparison, the EU2200i is actually notably silent. If the number of outlets turns out to be your main concern, an extension cord can make for an easy solution. Altogether, the EU2200i’s durability, fuel-efficiency, and safety give far more value for every penny you spend, making these minor flaws easily forgivable.

The Honda EU2200i uses SAE-10W-30 oil. You can buy it from Honda or any other brand. If the low oil indicator light is on, then that means your generator is due for a refill. You can also manually check the oil level by peering inside the oil reserve. It’s considered properly filled when the oil reaches the edge of the interior oil tank while the generator is placed on level ground.

With a running wattage of 1800W, the Honda EU2200i can run most appliances, devices, and power tools. But it helps to consider its limits, since running power-intensive electronics all at once can overload your generator.

To illustrate that point, certain air-conditioners require 1,500 watts to run. Because the EU2200i can sustain up to 1,800 watts, it would theoretically be able to run some air-conditioning units. But keep in mind that that leaves only about 300 watts in excess, which you might be able to use to light smaller devices like a mobile charger, a music player or radio, or a few light bulbs.

Another thing worth considering is the amount of time that the generator can sustain that kind of demand. By maxing out the load, you also shorten the generator’s run-time. To keep it operational, you’d have to refill the gas after burning up the fuel it takes to sustain power-intensive devices. The lower the demand, the longer the generator can run between refuels.

Q: What can I do if I need more than two outlets?

You can plug an extension cord into a power generator to increase the number of available outlets. But experts recommend using heavy-duty extension cords intended for outdoor use to minimize the potential hazards.

Theoretically, yes you can. But it depends on what you want to power. If you’re running a 7,000 BTU rooftop RV air-conditioner, you’ll need around 700 watts of power to keep it running. That leaves you 1,000 watts of left over power to divide among your other essentials. Since air-conditioning units tend to be energy hogs, you can consider sacrificing the regulated temperatures for more power to run your other appliances.

Another thing worth keeping in mind is the fact that the EU2200i comes with a fuel tank that measures less than a gallon. That would mean that maxing out its load with the requirements of an RV would require refilling the small workhorse at least once every three hours.

Finally, the EU2200i doesn’t have a TT-30 RV outlet. This means you’d have to purchase the separate paraphernalia to hook your generator to your RV since it isn’t an RV-ready model. To augment that problem however, Honda offers the EU2200i Companion model which features a 30A outlet that can accommodate a transfer switch for RV use.

Q: Can I convert the Honda EU2200i so it runs on propane or natural gas?

Yes. To run the Honda EU2200i on propane or natural gas, you can purchase a fuel conversion kit. These are also available from third party brands as an aftermarket purchase. Keep in mind though, buying from an unauthorized dealer and having it installed by the same can void your generator’s warranty. Make sure you’re choosing an accredited kit from a registered dealer to keep your warranty intact.

Is the EU2200i right on the money? Some might say that it comes at a steep cost considering its close competitors’ lower prices. But with the Honda EU2200i, you’re getting more than just an alternative energy source. The well-built machine promises excellent performance that lasts, serving superb fuel efficiency, safety, and power that outperforms most of its competitors.

Now, the question – is it right for you? Our Honda EU2200i review has revealed that the best-seller can cover a wide variety of applications and needs. But if you need a gas generator that’s small enough for transport and storage without compromising on power, the EU2200i becomes an even more obvious purchase. Certainly, it won’t be strong enough to power your entire household. But with just enough energy for all of your bare essentials and a little extra, this power generator serves up practical use that you can rely on for years to come.

You have read the article! Great job! Do not forget to rate the article.
☆ ☆ ☆ ☆ ☆
Who worked on the article:

9 Best Generator Under $500 – Affordable Solution for Your Power Problems

Related deals
We will be happy to hear your thoughts

7 Best Generac Generators: The Leaders of the Empire

©2019. All rights reserved. GeneratorWar™ contains affiliate links. BestGenSet is a participant in the Amazon Services LLC Associates Program, an affiliate advertising program designed to provide a means for sites to earn advertising fees by advertising and linking to Amazon.com

Let’s be friends!
For customers
Category